How To Add More Character To a Small Garden

I think we have all at certain times owned a patch of grass either at the front of our house or a small patch in the back garden that serves no purpose. Our front garden was one of the last areas that we tackled. It had been a scruffy mossy lawn bordered by a low conifer hedge, not very inspiring. However we had so much to do to the house and rear garden that it took a back seat. We lived with it for several years, dragging the lawn mower around the front to tidy it up.  Now please remember we are not professional gardeners just amateurs but I thought this post might help those of you nervous about having a go at creating something similar. 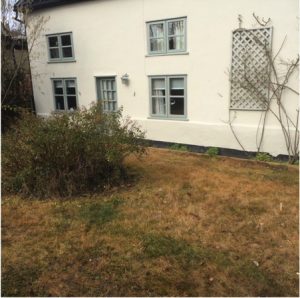 I knew when we bought the house 13 years ago the potential for this area and eventually we decided to tackle it! Now…where do you start?  Before we did anything we drew the area to scale on graph paper, I think this is essential, we decided on a simple shape of a circle in a middle and four shaped rectangles leading off. We factored in the width of the paths and drew it all on the plan. Its really not difficult to do and helped to keep us focused. 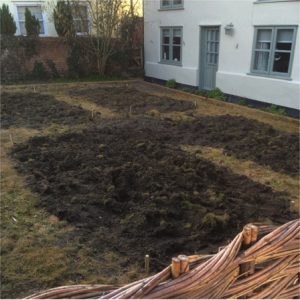 and we decided to spray off the grass a few weeks ahead of when we wanted to start work. We then marked out with string and pegs the shape of the borders and paths ,you can also use a coloured spray to do this. The next step was probably the hardest bit, we had to dig over the border areas where we knew we would want to plant up and edged them all with 6 by 1 tantalised timber so that the gravel from the paths wouldn’t spill into the beds. The beds were dug over and we added as much well rotted compost that we had as the soil was very poor. We then put down a membrane on the path areas to  help keep the weeds at bay, my advice would not to skimp on the quality of this as some of them end up fraying and shredding once they have been down a few years.

We started to plant with the Box hedging which was bare rooted and fabulous value from our local tree nursery. We have previously taken cuttings of Box which we used for the garden at Hollyhock Cottage but we needed so many here we had to buy them in.  We added manure to the trench to help to give them a good start with plenty of nutrients.

Once the box was planted we filled the paths with lots of gravel and suddenly it started to take shape. 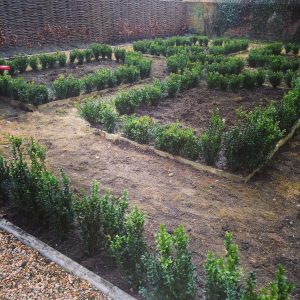 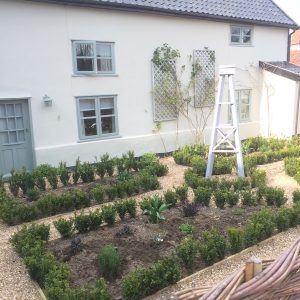 We also had a willow fence built to run along the front of the garden and curve around. I will be shortly building another one so I will blog about this soon! We added a Beech hedge behind the willow fence.

Dave then built an obelisk and we planted a climbing rose to grow around the obelisk and add height to the garden. Once it was all planted it is relatively low maintanance except for trimming the box hedge once a year and a little bit of weeding in the beds.

It has been so satisfying seeing this garden develop over the last few years and I love looking out onto it from the house. 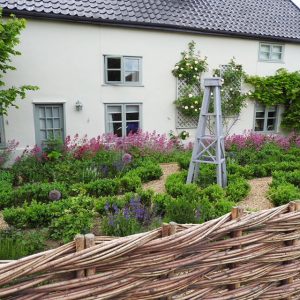 Hope you have found this inspiring! Please let me know your thoughts in the comments below.

I absolutely love this Debbie a pleasure always to dip in and out of your blog to see what you’ve been up to. I do hope to visit Room with a View one day soon and perhaps stay in one of the beautiful cottages.
by Carol Bain
I absolutely love what you've done here it is just so inspiring and just goes to show you don't need a lawn to have a fabulous green space. I already have the obelisks my Dad made me....on I go ditching that dry old lawn of ours. Especially after 42 degrees here in France this summer...there's nothing left of it! Thanks again for sharing x
by Katie A
Beautiful garden, love it. We have an uninspiring front which will incorporate a drive to the garage.... when we eventually renovate, this post will help no end, thank you!
by Helen
This really is such a beautiful garden. It compliments the cottage perfectly. Your great eye for design is clearly not limited to interiors. 😀
by Amanda
Your garden always makes smile. It is so lovely and thanks you for sharing how it was developed. I get so much pleasure looking at your Instagram and have used your summer house as inspiration for my own.
by Norma
Debbie...this is brilliant! I love how you are so generous with your advice, many of us aren’t able to seek advice from interior designers but your posts are always inspiring and help guide us in the right direction! Many thanks!
by Harriet Pinder
It looks exactly like how you planned it to be. And quintessentially English 😊 I love it!
by Cyndi smith